Debate - “Global warming is not a crisis”

Given all the hype, propaganda and hysteria surrounding ‘global warming’ it is refreshing to see that there is some actual debate taking place.

Yesterday, an Oxford style debate with the motion "Global warming is not a crisis" was held. For the motion: Michael Crichton, Richard Lindzen and Philip Stott. The affirmative side won. Detailed results: 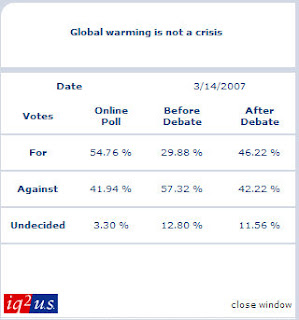 Note the significant post-debate shift to the affirmative.

Expect the debate to be available online in the near future.

Thanks to "A Dog Named Kyoto" for finding this.