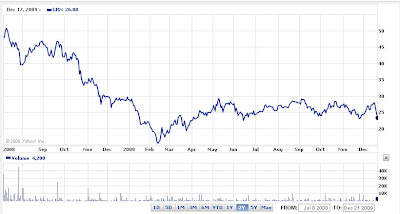 Reading some commentary from Britain (Devil's Kitchen blog mostly) the emerging theme there is that Copenhagen was designed to save Big Carbon from being wiped out by the expiry of Kyoto. If there is nothing under the carbon market, all those who bought carbon credits and carbon futures will lose money.

I continue to be baffled by the lack of interest by Canadian media in following the money. For heaven's sakes, turn your adoring eyes away from David Suzuki and look at the Spawn of Enron that is rising before your eyes! Billions of dollars for nothing. Bah, serves us bloody well right if it happens.

Thanks, BCF. I've been out of town so, a slightly belated Merry Christmas to you and yours. And all the best in 2010.