From the front page of my local rag this morning:

Smokers will no longer be allowed to scurry in and out of Save-on-Foods Memorial Centre for a cigarette break during hockey games and concerts. And coming soon -- patrons will be prohibited from bringing cigarettes into the arena.

Smugglers will have their cigarettes confiscated in the same way drugs or alcohol would be following a random search.

A provincial law that came into effect March 31 prohibits smoking within three metres (or 10 feet) of doorways ...

The moves were based in part on warnings from the U.S. surgeon general that there is no safe level of exposure to second-hand tobacco smoke. [No safe level? It’s the same as saying that someone lighting up 20 (or even 1000) miles away is endangering your health. That’s completely irrational.]

Victoria's arena was in compliance with the B.C. law ... [but] arena staff found policing the in-and-out privileges, as well as the smoking areas, to be a logistical nightmare.

Draconian laws banning smoking became too onerous, so the management enforces even more draconian measures to compensate. Does that bother the ‘authorities’? Nah. Quite the opposite:

Provincial and regional bylaws "don't preclude businesses or municipalities
or regional districts from going further." Rather, it's encouraged, he said.

Now they’re searching people and confiscating their (perfectly legal) cigarettes. What next?

Give the health and safety fascists an inch an they’ll take a mile. They ALWAYS go too far. And there’s no end of things to ban or to their demands for absolute safety.

No one can be allowed to decide for themselves what’s best or worth risking. The growing nanny state and its fanatical cheerleaders know best. And, for the most part, few complain.

The people of Victoria weigh in: 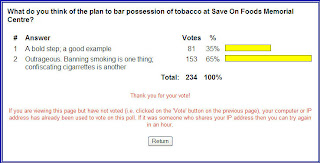 I gotta say I'm not opposed to this. Don't get me wrong - I'm a strong supporter of personal liberties and I think smokers who want to smoke should be able to do so. HOWEVER... in my opinion that particular liberty SHOULD be curtailed when it affects ANYONE else. I have the right to walk down the street and not have to hold my breath through a second-hand smoke cloud. I believe that in this case the collective desire of the majority to NOT breathe cigarette smoke supercedes the minority right to be able to smoke. So smoke in your house... smoke on your property... whatever... I don't really care. But I shouldn't have to smell/breathe it.

Your arguement that it's like seatbelts or helmets is flawed. Anti-smoking laws are not for YOUR own good legislation like seatbelts & helmets... they're for EVERYONE ELSE'S own good laws. Don't you get it??? The public is being protected from SMOKERS and I wholeheartedly support it!!! It has been a glorious year here in Alberta where smoking is now illegal within 5 metres of a public doorway. I don't have to run the gauntlet anymore. It's wonderful!!!

and then you said:

"No one can be allowed to decide for themselves what’s best or worth risking. The growing nanny state and its fanatical cheerleaders know best. And, for the most part, few complain."

'You wanna smoke? By all means please do! Just not around anyone who might not want their lungs rotted out by the result of YOUR choice. Get it?'

Tell that to all of the pot smokers! I, for one, become extremely nauseous at the smell of pot smoke, yet, the last concert I attended, the smoke in there was so thick, I was forced to leave. There is a law against smoking pot, period, inside or out, but apparently that one is not enforced.
The attendants did nothing about it, but had I lit up a cigarette, I would have been escorted out.
I agree that smoking inside should not be allowed, but if they think they are going to take away a product that I legally purchased, they better think again. If I were so stupid as to attempt to bring alcohol into that venue, I would expect it to be confiscated, cigarettes - an entirely different matter as they are not used inside the building.

Anon1, You make a valid point that smoking and seat belt laws are not quite the same. I agree that there should be venues where non-smokers can be free of smoke. I too am a non-smoker. You’ll note, however, that my complaint is that the health and safety zealots go too far. The nanny-state, control-freak mentality that went into mandating seat belt and helmet use, for adults fully capable of deciding such things on their own, is the same mentality that has driven ever more draconian restrictions on smokers as well as attempts to dictate food choices, etc.

In the case of anti-smoking laws the zealots don’t hesitate to hype nonsense like “there’s no safe level of exposure to second hand smoke.” And while I can understand their desire to avoid smoke, many anti-smoking fanatics are frequently ridiculously over-the-top with their objections. The same people think nothing of sitting in heavy traffic sucking in exhaust fumes for hours on end. And many of the outdoor patios, where smoking is no longer allowed in my city, are just a few feet from busy streets full of cars and delivery trucks. The same people who would be apoplectic over a smoker within 20 feet happily eat lunch in the exhaust fumes and noise.

Anon2 makes an excellent point about the hypocrisy surrounding pot use.