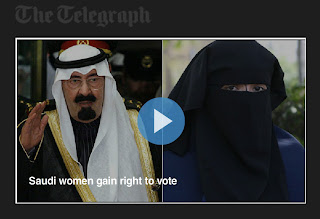 
King Abdullah, the Saudi ruler, conceded that a study of Muslim history had shown that women were capable of rational thinking and decision making. [Who'da thunk?]

When it was learned they would have to show their driver's licenses to vote, King Abdullah was asked if that meant women would now be permitted to drive. The King replied: "What? Are you nuts? In a burkha? Way too hazardous!"
Posted by JR at 12:32 PM

So they'll modify the burkha to make it less hazardous?!?

Heh:) Right, Frances - sometime around when Abdullah converts to Judaism.