’A Dog Named Kyoto' alerts us to a very scary report about recent global cooling and the possible onset of a new ice age.

All four agencies that track Earth's temperature ... report that it cooled by about 0.7C in 2007. This is the fastest temperature change in the instrumental record and it puts us back where we were in 1930. If the temperature does not soon recover, we will have to conclude that global warming is over.

It is generally not possible to draw conclusions about climatic trends from events in a single year, so I would normally dismiss this cold snap as transient, pending what happens in the next few years. [But]

... The sunspot number follows a cycle of somewhat variable length, averaging 11 years. The most recent minimum was in March last year. The new cycle, No.24, was supposed to start soon after that, with a gradual build-up in sunspot numbers.

It didn't happen. The first sunspot appeared in January this year and lasted only two days. A tiny spot appeared last Monday but vanished within 24 hours. Another little spot appeared this Monday. Pray that there will be many more, and soon. [None as of this post - to check go here.]

The reason this matters is that there is a close correlation between variations in the sunspot cycle and Earth's climate. The previous time a cycle was delayed like this was in the Dalton Minimum, an especially cold period that lasted several decades from 1790.

It is time to put aside the global warming dogma, at least to begin contingency planning about what to do if we are moving into another little ice age, similar to the one that lasted from 1100 to 1850.

All those urging action to curb global warming need to take off the blinkers and give some thought to what we should do if we are facing global cooling instead.

It will be difficult for people to face the truth when their reputations, careers, government grants or hopes for social change depend on global warming, but the fate of civilisation may be at stake.

Should this comes to pass it will be doubly bad news for Al Gore and his fellow AGW mongers. They will be irrefutably proven to be the idiots we "deniers" know them to be AND they’ll be up to their arses in snow and ice - and, more unfortunately, so will we!
Posted by JR at 12:36 PM 4 comments:

While I’m all in favour of a clean environment (always have been) these Earth Day/Earth Hour/Earth This/Earth That events have become beyond tiresome. They’re downright aggravating. You can’t pick up a newspaper, listen to a newscast or even shop at The Bay without some eco-nag trying to guilt you into changing your polluting ways. At the root of all this eco-bullsh*t, as we all know, is climate change hooey.

My natural reaction is to demand double plastic bags at the grocery store and snarl at green nags everywhere.

In a letter to the chairman of the UN IPCC four prominent scientists wrote:

... to ask that you now in view of the evidence retract support from the current IPCC position ... and admit that there is no observational evidence in measured data going back 22,000 years or even millions of years that CO2 levels (whether from man or nature) have driven or are driving world temperatures or climate change.

If you believe there is evidence of the CO2 driver theory in the available data please present a graph of it.

We draw your attention to three observational refutations of the IPCC position (and note there are more). ... 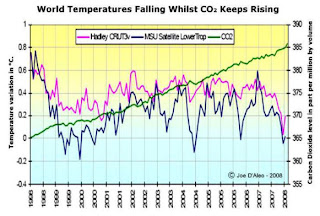 Given the economic devastation that is already happening and which is now widely recognised will continue to flow from this policy, what possible justification can there be for its retention?

We ask you and all those whose names are associated with IPCC policy to accept the scientific observations and renounce current IPCC policy.

I won’t be holding my breath waiting for the response. But if and when it arrives it will no doubt cite the latest IPCC report and include a graph shaped like a hockey stick.

From all I’ve read on this I have to conclude that this decision was purely political. The Tories no doubt based it on polling. It’s a massively popular move that appeals to nationalist and anti-American sentiment. That it’s a horrible idea should be obvious from the fact that Jack Layton and the NDP have praised it so enthusiastically.

In the long run it will end up just being hugely expensive for MDA shareholders and taxpayers and a hit against free enterprise and property rights. All this for the national ego and no significant effect on sovereignty or national security.

Charlton’s Heston’s death last Saturday sparked a lot of predictable commentary in the media, including this crud from Peter Dawson in the Globe and Mail:

Now that Charlton Heston is dead ... perhaps it's time to pry the gun from
his cold, dead hands.

From an obituary by Jay Stone in today’s ‘Post’:

Charlton Heston was square of jaw, square of politics and square of acting style....

...remembered both for his Biblical movie epics and for his later role as spokesman for the National Rifle Association and other right-wing causes.

... Eventually, his personal and political life came to define him. A former head of the Screen Actor’s Guild and chairman of the American Film Institute — as well as a Democrat who supported such liberal causes as civil rights — he became more conservative as he aged, eventually becoming associated most closely with gun ownership.

"...Heston was a more complex man than we might have imagined: he supported JFK, marched for civil rights with MLK and was president of the [dastardly] National Rifle Association." (Quoting from memory)

Dawson's remark aside, they seemed to imply that Heston’s work with NRA somehow contradicted his earlier support of ‘liberal’ causes: as a Democrat (like most of Hollywood) he supported civil rights BUT later became an evil gun-nut campaigning for the rights of knuckle-dragging, right-wing gun owners.

To my mind, Heston was being consistent throughout. As a Democrat he campaigned for civil rights guaranteed by the constitution. His later prominence in the fight for the constitutional right to gun ownership was consistent with this philosophy. If he no longer fit with the Democratic Party it was because the Democrats shifted significantly to the left not because Heston moved to the right.

Edward Michael George does a great job of exposing Macdonald’s idiocy. Some teasers:

[Macdonald] contends that Rev. Wright's sermons are "worth reading." That is, that they have some value above and beyond what others have identified as their hatefulness (that is to say: their overt racism), and their patent lunacy.

.... you do understand, Neil, that blaming "America" (by which, needless to say, the good Reverend means white America) for the crimes of some Americans, mostly long long dead, is itself the very definition of hatemongering, right?

.... It's true. Tuskegee was a deplorable event .... But the thing is, Neil, nobody is taking issue with him on this. What they take issue with is his lunatic belief that AIDS was developed by the United States government to exterminate the black race. You, in spite of all your bleating on about context, make no mention of this.