Friends of Science Society is challenging Alberta’s Premier Rachel Notley to clear the air before the Paris COP-21 climate change conference, regarding statements she made about Alberta’s air quality and environmental track record. ...

... According to the World Health Organization, Canada has the third best air quality in the world ... with both Calgary and Edmonton ranked in the top ten best air quality cities in Canada ...

... Premier Notley spoke to the Alberta Chambers of Commerce on Sept. 22, 2015, claiming that Alberta’s air quality was poor and ... Friends of Science reject this statement pointing out the hypocrisy of bowing to the pressure UN Climate Change policy advocates ...

And what's the Paris meeting all about? Michelle Stirling knows:

Russian warplanes began bombarding Syrian opposition targets in the war-torn nation's north Wednesday, following a terse meeting at which a Russian general asked Pentagon officials to clear out of Syrian air space and was rebuffed, Fox News has learned.

... The strikes hit targets in Homs and Hama, but there is no presence of ISIS in those areas

So, Putin is bombing Syrian rebel forces being supported by the Obama coalition.  When Obama met with Putin for 90 minutes in New York this week you have to wonder what the "pixie dust president"  gave away this time.

Inside the progressive brain

The autopsy of a progressive brain concludes that death was due to "excessive exposure to logic and human decency":

Climate alarmist outrage of the week


... Twenty alarmist climate scientists – including UN IPCC lead author Kevin ‘Travesty’ Trenberth – have written a letter to President Obama urging him to use RICO laws to crush dissent by climate skeptics. Their hypocrisy and dishonesty, especially that of the main signatory, almost defies belief.....

The Pope - a political hybrid


... The Pope does not fit into normal political categories. He is a hybrid of social conservatism and socialism, which made his speech an inevitable mixed bag, a platter of papal platitudes peppered with elements of controversy, some carefully-padded, some not.

It's still Canada's best bet as a replacement for the F-18:


... a competition would be a costly and largely pointless process.

... it is clear that cancelling the F-35 procurement will not result in tens of billions of dollars saved, nor serve any of Canada’s longstanding interests. The men and women who will operate Canada’s future fighter deserve better.

The above conclusions are based on the current fly-away cost per aircraft (using the F/A-18E Super Hornet as a comparison).  This is in contrast with  this partisan analysis which uses scary looking full life-cycle costing.

Fly-away cost is the simplest and most realistic basis for comparison.  Any aircraft of roughly similar capability will incur similar life cycle (operation, maintenance, supply and upgrade) costs.  The most important differences will be seen in the bang for fly-away buck. It's the way we all make decisions for big ticket purchases.

Unfortunately, politics, not cost or capability, will be the biggest factor in the decision, with Trudeau's promise to scrap the F-35 procurement sounding like Chretien's costly scrapping of the Sea King replacement in 1993 (we're still waiting for the replacement to be completed).

Hillary comes out against Keystone XL

But does so under cover of the Pope's visit:


Democratic presidential candidate Hillary Clinton has come out against the controversial Keystone XL oil pipeline. It's something she has spent months avoiding taking a position on — and her announcement coincided with the mass media event of Pope Francis' landing at Andrews Air Force Base.


... The increase in sex crimes in Germany is being fueled by the preponderance of Muslim males among the mix of refugees/migrants entering the country.

... The asylum seekers are also overwhelmingly male. Of the 411,567 refugees/migrants who have entered the European Union by sea so far this year, 72% have been male, 13% women and 15% children

How does this not give cause for huge security concerns?

A related side note: During the leaders' debate yesterday Stephen Harper said that Mulcair and Trudeau "would throw open our borders to hundreds of thousands of refugees ... no security checks or documents".   This got the excitable Terry Glavin excited; and when Norman Spector tried to calm him down a mini Twitter kerfuffle ensued.

Trudeau in trouble in Papineau riding:

A pox on both their houses, but it would be good if these numbers hold.


The “Leap Manifesto” issued on Tuesday by an asylum full of celebrity victims of Harper Derangement Syndrome – led by Naomi Klein and David Suzuki – is certainly a thought-provoking platform. The main thoughts it provokes are: Does achieving celebrity cause a sharp drop in IQ and increase in hypocrisy, or does all-consuming artistic ego and/or power-hungry socialist inclination prevent all logical thought?...

... You’d think that somebody among the Deep Thinkers might have reflected that “leaping” doesn’t have the best of historical connotations. Specifically, it conjures up Chairman Mao’s Great Leap Forward, a lurch to socialized modernization that led to tens of millions of deaths.

... Klein is a great promoter of the notion that the dark forces of capitalism deliberately manufacture “crises” as an excuse for dictatorial control. She is quite impervious to any suggestion that the “climate crisis” might come into the same category.

...The manifesto’s main points were also promoted in a piece in the Globe and Mail on Tuesday by Klein, Suzuki, and three other well known policy experts, Leonard Cohen, Donald Sutherland and Ellen Page.

... The majority of the manifesto is taken up with peddling the fantasy of a total switch to alternative energy within a couple of decades, and demanding an end to fossil fuel activity. ... “We call,” note the Gang of Five, “for town hall meetings across the country where residents can gather to democratically define what a genuine leap to the next economy means in their communities.”

... The manifesto confirms that one of the things going for Stephen Harper in this election is his enemies.

If these leaping freaks ever got their way we'd soon find ourselves in a totalitarian nightmare forced to  quote from Chairperson Naomi's Little Green Book. Their rabid nonsense also has hints of the French Revolution and its Reign of Terror. 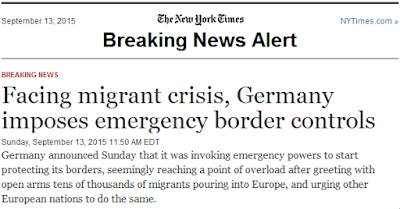 Of migrants, climate and HDS


Soon after being sworn in as President of the United States in 2009, Barack Obama made the historic speech in Cairo that would launch the Arab Spring the following year. Within weeks of the start of the protests, Egyptian President Mubarak was overthrown with Obama’s encouragement, leading to the takeover by the Muslim Brotherhood ...

Obama's foreign policy has been an unmitigated disaster on many fronts, the M.E. refugee situation being the biggest example of the consequences so far.  He has telegraphed nothing but weakness to the world and the world's worst actors have taken note:  Russia (the Ukraine), Iran (the Godawful nuke deal, for one), China (wait for it!), ...  Too bad (for the world) that he still has over a year left as POTUS.  But when he's gone, any of the 17 Republican candidates will be a vast improvement.

The rocky road to the federal election is running parallel to the even rockier road to the (latest) “last chance to save the world” UN climate conference in Paris. In fact, their paths are not so much running parallel as frequently colliding. Both are littered with refugees, in one case real, in the other phantasmagorical.

Profound Climate Concern – which tends to overlap with Harper Derangement Syndrome — has become a key factor in Canadian politics. It lies at the bottom of rabid opposition to further development of the oil sands and pipelines, the proliferation of subsidies for unreliable wind and solar energy, and a hotchpotch of plans to curb emissions via regulation, taxes or trading systems. All mean lost jobs and reduced GDP. Only Stephen Harper has dared to point this out, and has been roundly abused for doing so. ...

Breaking news from the NYT:

This would be like Stephen Harper pledging to take 1000 refugees.

How would that go down with our media?

As contrasted with the Canadian refugee frenzy, Americans are not going nuts trying to outdo each other on taking in Syrian refugees.  Here's another example with Dana Loesch and Megyn Kelly:

... Just what it is about the Conservative Leader that sends reasonable people into such fits of hysteria is best examined by historians, or better yet, psychiatrists. But it surely can’t be evidence, for Mr. Harper’s political style is not particularly novel ...

For starters, that they're "reasonable people" may be a bad assumption.

Joanne at Blue Like You wonders how best to deal with HDS.

The disgusting, cynical, political exploitation of a tragedy 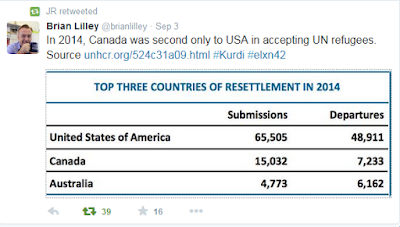 And these are raw totals. Per capita or relative to GDP, that puts Canada at the top of the heap by a wide margin.
Posted by JR at 7:07 PM 14 comments:

Stephen Harper's speech in Surrey and the media Q&A

Further to my previous post here are the videos: 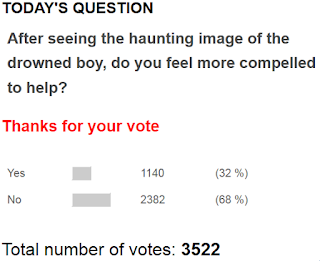 I just returned from a Conservative campaign event held Surrey, BC early this morning.  The event was cut short with PM Harper addressing only one issue which had been forced to the fore by breaking news of the drowning of a Kurdish refugee family (mother and two young boys) attempting to get out of Turkey.  It was big, big news because the family was attempting to get to Canada.

The PM's speech covered the situation and laid out the government's three pronged approach: help refugees over there, bring refugees here and military action to stop those responsible for forcing people from their home, mainly ISIS.

The Media Party was there of course and the PM took questions from 4 or 5 reporters.  Every single one, starting with Paul Wells, asked the same sanctimonious, one-note, bleeding heart question: Why isn't Canada accepting more refugees, faster, ... ?  The PM gave them all the same answer which was a repeat of his speech.

They all sounded like they were carrying water for Mulcair or Trudeau.  Not one original question came up,  like, for example: "Why isn't Canada stepping up military action to stop ISIS and stem the refugee crisis?"

Two articles by Terry Glavin on this:

Alan Kurdi drowned off the shores of Turkey. His family was trying to reach Canada

Update - CTV News poll backfires. [via the comments and sda]

We're in a "tecnical recession". So, what is a "technical" recession?

Who knows?  It's a meaningless term:


We still don’t know whether Canada is in a recession. After a steady drumbeat of claims that Canada had fallen into a “technical” recession in the first half of 2015, second-quarter GDP dipped 0.1 per cent, although it grew 0.5 per cent in June. Given the country’s steady job growth, there isn’t much more clarity about a possible recession today than there was before the six-month economic data were released on Tuesday.

...all the emphasis on the idea that Canada was in a “technical” recession — as opposed to some other, non-technical type. The term is meaningless; all recessions are technical  ...

... When people call it a technical recession, it’s a signal that they have either a political agenda or they lack expertise ...

It's worth noting that Philip Cross, the author of the above linked column, was the Stats Can guy who wrote the book on defining these things.

Of course none of this makes any difference whatever, politically, for those with an agenda.  And, in election season who could possibly have a political agenda?  They'll use it to their advantage by exaggerating, obfuscating or lying. And most won't know the difference.