Throughout its National Action Plan, India demonstrates that it will divert precious little of its scarce resources to solving the climate crisis.

... it's a money-maker for India and a lever with which to obtain western technology. As the Action Plan makes clear, there's only one condition under which India need spend a rupee to help curb global warming "--(if) these incremental costs are borne by developed countries and the needed technologies are transferred."

... man-made global warming may not exist, and that if it does exist, its existence may be of no account to India.

"No firm link between the changes described below and warming due to anthropogenic climate change has yet been established,"

... why spend money on this possible non-event. Much better to focus on maximizing wealth and health.

It’s too bad our own political class can’t be as bold and realistic.

But get this! The chairman of the UN IPCC, the organization that has consistently and loudly warned that unless we curb GHG emissons "we’re all gonna die!!" is none other than India’s own Rajendra Pachauri - the same Rajendra Pachauri who helped draft and strongly supports India’s Action Plan. In other words he’s a monumental freaking hypocrite:

... he has been a vehement defender of the UN Panel's position, brooking no dissent from the view that time was short if the planet was to avert climate change catastrophe.

And at the same time:

He vehemently endorsed his Prime Minister's [AGW denying] National Action Plan.... [which] should be implemented and the west should "get off the back of India."

Incredible! I wonder how long Mr. Pachauri expects to keep his job at the UN IPCC.
Posted by JR at 6:42 PM 5 comments:

A "not-yet-released Health Canada report" warns of the effects of climate change on health:

A major report on climate change and health forecasts a higher risk of injuries, illnesses and stress-related disorders brought on by more frequent bouts of extreme weather.

The report also calls on Ottawa to pay more heed to health and social services groups that plan for extreme weather, and to raise the public's awareness of ways to prepare for, and adapt to, climate change.

Though obviously I haven’t yet read the "500 page report" I suspect we can chalk it up as an utter waste of time - one more example of taxpayer funded useless junk. The possible health effects that could possibly, maybe, materialize IF Canada’s climate "changes" by who knows how much under the implicit and largely speculative assumption that said "climate-change" is caused by humans - ie. speculation on speculation on speculation.

But the government’s cautious handling of the study’s release seems encouraging. Despite the waste of time and money generating the report:

... the federal government paid a public relations firm $50,000 to choreograph the report's release, only to quietly post it online after 5 p.m. on a Friday.

No doubt, though, that the idiot eco-loons and AGW-true-believing MSM will do their level best to maximize the report’s importance. I heard about it yesterday via a local radio news-cast that pumped up the scary climate-change rhetoric.
Posted by JR at 12:36 PM 4 comments:

"Loony-liberalism" a threat to liberty

George Jonas at his best:


... the force with the greatest capacity for becoming a threat to liberal democracy is liberalism itself -- meaning loony-liberalism, a kind of ideological menage a trois between Timothy Leary, Karl Marx and Al Gore, at once passionate and arid, that in Western societies has all but captured the educational and judicial machinery of the state.
In some, it's a virtual state religion, whose matriarchal, environmentalist, multicultural, anti-male, anti-family, anti-individual and public-hygiene shibboleths are enforced by Orwellian regulatory agencies, commissions and tribunals, better known as the smoke-, smut-, seat-belt-, thought-, language-and calorie-police.
... Democracy, far from being eco-fascism's enemy, seems to be its friend. Its enemy is liberty. That's why I think liberty has as much to fear from democracy as from autocracy.
... I wouldn't rule out anything, not even peace and tranquility, albeit more likely as a result of repression than of good government.
... I'd give individual liberty the worst odds. I think it will continue to decline in the 21st century.

Short, sharp and to the point.

The "bollock-brained" appeasement of Islam

Here's Pat Condell with some great straight talk on the stupid multi-culti appeasement of Islam.
He gets to the Canadian "Sock Puppets" at around the 5-minute mark. 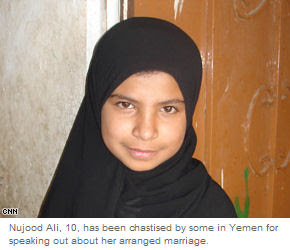 SANAA, Yemen (CNN) -- Nujood Ali is 10 years old, but she already has been married and divorced. It was an arranged marriage in which she said a husband three times her age routinely beat and raped her.
Criminal! But then wasn't her "husband" just following the Prophet Muhammad?
Posted by JR at 11:20 AM No comments: 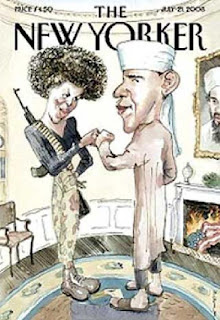 ... Obama, ... it’s becoming increasingly clear that he hasn’t actually thought about anything much in recent years except becoming president.... But if you ask him about anything else, when he’s not doing one of his pathetic, scripted, great gaseous uplift of change you can believe in speeches, if you ask him a question off the cuff, that he’s not scripted on, he’s pathetic. He’s truly pathetic. ...listening to [unilingual] Obama talk about unilingual Americans being an embarrassment, I began to get a distinct Kerryesque whiff, the whiff of the Boston Brahmin hung over the Kenyan-Indonesian-Hawaiian, or whatever he is.

... when you look at the flip-flopping and the changing of courses, and all the rest of it, what you see is a man who throughout his career has taken the path of least resistance. ... he’s never actually dared to take any position that would cause him any problems with the people he spent courting. That’s not the kind of guy...you want...sitting in the Oval Office.

He’s a very self-absorbed guy, and I don’t think he actually thinks about the wider world, except in terms of his place in it, like this extraordinary demand that the Germans found so offensive, that this man, who just happens to be a candidate, he’s not a head of state yet, or anything, demanding to be allowed to give a speech at the Brandenburg Gate... His self-absorption and narcissism is incredible.

The EU road to serfdom

Steyn’s back! On the Hugh Hewitt show summarizing the EU constitution:

... it’s a centralized federation being built from the elite bureaucracy down to the people. And every time they let the people vote on it, the French and the Dutch, and now the Irish a couple of weeks ago, they vote against it, because they rightly see it as a racket. The first words of the U.S. Constitution are We, The People. The first words of the proposed European Constitution are We, the people who know better than you, the little people.

... a classic sort of royalist attitude ... a few ... Euro big shots can sit down and tell an entire continent of serfs what it is that’s going to happen.

U.S. Constitution, ... in New Hampshire, they carry it around in their pockets so they can berate their Senators and Congressmen for not sticking to it. You can buy it for $3 bucks, and it fits in your pocket. If you try to put the European Constitution in your pocket, you will be walking with a crippling limp after about six minutes. ... it’s like this huge, great, bureaucratic monstrosity.... it’s doomed.

This CTV story reports that the Canadian Teachers Federation wants to criminalize "cyber-bullying" which they define as:

"... the use of information and communication technologies to bully, embarrass, threaten or harass another. It also includes the use of these technologies to engage in conduct or behaviour that is derogatory, defamatory, degrading, illegal or abusive."

It seems to me that threats, harassment, defamation and "illegal" behaviour are already illegal. The rest just represents more namby-pamby hyper-sensitivity from the same bunch who think dodge-ball too violent and call in the trauma counsellors whenever someone’s dog dies. 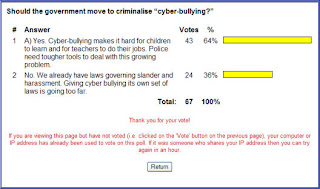 The locals, so far, seem supportive of the CTF position. This is, in part, the mentality that resulted in HRCs across the land.
Posted by JR at 11:58 AM No comments:

A couple of days ago Jonathan Kay penned an article on how it would make sense for conservatives to back a carbon tax. Whatever, but what struck me most about the article was that it illustrated how completely the mainstream press has bought into the man-made global warming horror story and the skewed thinking that goes with it:

"...auto-dependant, air-conditioned, eight-lane suburban lifestyle made possible by cheap oil has created a nightmare not only for our environment..."

"Modern suburban developments have no sidewalks ...
too busy navigating that other creature of cheap oil: the local megamall ..."

"...red-meat conservatives cruising around with right-wing bumper stickers affixed to the back of their eight-cylinder pick-up trucks..."

What "unbridled materialism"? Would that be Jonathan Kay’s or everyone else’s?

What "nightmare ... for our environment"? More likely a "nightmare" for our economy.

There are "no sidewalks"? Almost every new suburban development I’m familiar with, including my own, has sidewalks.

Peter Foster picks up on this in his column about Hollywood’s most recent spate of movies featuring unbridled anti-corporatism, concluding with:

One is ... presumably not meant to take any of these entertainments too seriously. Still, with the editorial pages of both the Post and the Globe yesterday featuring condemnations of "unfettered capitalism," "unbridled materialism" and "neo-liberal fundamentalism" perhaps nobody should take casual but persistent condemnation of the market’s most prominent actors too lightly.

If the world is facing a clear and present danger, it is that eco-hysteria and anti-corporate sentiment will lead the political class to impose the kind of draconian, wealth-destroying policies that they hypocritically preach but know will be destructive.

An excellent article by T.J. Nelson provides a comprehensive overview of the science surrounding anthropogenic global warming. Some highlights:

Introduction
What is the contribution of anthropogenic carbon dioxide to global warming? This question has been the subject of many heated arguments, and a great deal of hysteria. In this article, we will consider a simple estimate based on well-accepted facts, that shows that the expected global temperature increase caused by doubling atmospheric carbon dioxide levels is bounded by an upper limit of 1.76±0.27 degrees Celsius. This result contrasts with the results of the IPCC's climate models, whose projections are shown to be unrealistically high.

[...]
[...]
Conclusion
Although carbon dioxide is capable of raising the Earth's overall temperature, the IPCC's predictions of catastrophic temperature increases produced by carbon dioxide have been challenged by many scientists. In particular, the importance of water vapor is frequently overlooked by environmental activists and by the media. The above discussion shows that the large temperature increases predicted by many computer models are unphysical and inconsistent with results obtained by basic measurements. Skepticism is warranted when considering computer-generated projections of global warming that cannot even predict existing observations.