Also, here's a video with Glenn Beck's commentary on Coulter's reception at the University of Ottawa. [h/t] 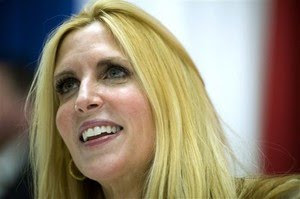 Predictably, Ann Coulter's Canadian speaking tour is stimulating controversy. Taking the cake is the laughably sanctimonious condescension of one Francois Houle, Provost, University of Ottawa, lecturing Miss Coulter on Canada's approach to free speech and warning her to watch what she says or risk criminal charges. Nice touch - Ann will be very thankful for the publicity for her speaking tour and the fodder for further ridiculing Canuckistan.

Also, today Marni Soupcoff claims the whole episode proves that Canadians just don't understand the meaning of free speech - which is a fairly well known fact confirmed by our "human-rights" laws, our "Human Rights" Commissions and Tribunals and today's poll in the Globe & Mail:

Update from BCF: University of Ottawa disgraces itself - cancels Coulter.

And here's the CBC poll: Ann Coulter: Should she limit her speech in Canada? 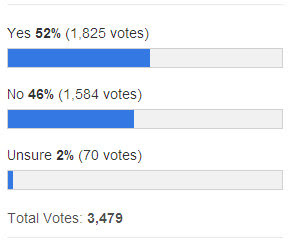 .
.
.
.
Note. The CBC poll results have significantly turned around since they were posted here.

Last month Blazing Catfur posted about his efforts to chase down the skinny on Palestine House's anti-Israeli hate-mongering. Palestine House Education (PHE), Mississauga, Ont is the recipient of federal funding and BCF requested that people write to our government asking them to wise up. Here's mine today (better late than never?):

According to NGO Monitor the Canadian government has spent or committed to spending approximately $4 million (2008 through 2010) in support of the activities of Palestine House Educational (PHE) of Mississauga, Ont.

According to information obtained from the RCMP through FOI (see also Part 2 and Part 3), PHE has been engaged in promoting anti-Israeli, anti-Semitic hatred.

Though Canadian taxpayer funding is, ostensibly, for immigrant "settlement and education" it is clear that PHE is engaged in activities that run counter to Canadian values and the public good. It is inappropriate for the Canadian government to fund such an organization in any way, for any purpose. If you insist on funding "settlement and training" for Palestinian immigrants, find another way to do it.

You are urged to cut off all funding for PHE and for any other organization engaged in similarly objectionable activities.