The Supreme Court expanded that distribution enormously by publishing its Whatcott decision, including  Whatcott's flyers (see below), on the internet. 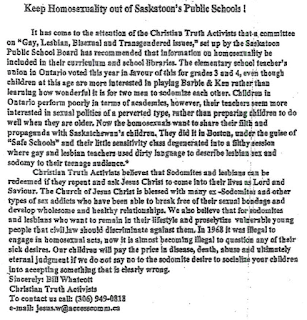 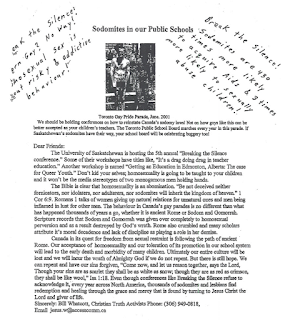 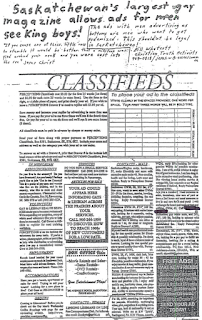 In its cowardly, politically correct "Whatcott" decision today, the Supreme Court has delivered a blow against free speech.  Ezra Levant predicts a surge in "hate" speech complaints to "human rights" commissions and tribunals:

Right now I'm feeling hatred and contempt for our Supreme Court justices.  In other words ...
Posted by JR at 5:27 PM 4 comments:


“Sue and Settle “ practices, sometimes referred to as “friendly lawsuits”, are cozy deals through which far-left radical environmental groups file lawsuits against federal agencies wherein court-ordered “consent decrees” are issued based upon a prearranged settlement agreement they collaboratively craft together in advance behind closed doors. Then, rather than allowing the entire process to play out, the agency being sued settles the lawsuit by agreeing to move forward with the requested action they and the litigants both want….

... taxpayers, including those impacted regulatory victims, are put on the hook for legal fees of both colluding parties. According to a 2011 GAO report, this amounted to millions of dollars awarded to environmental organizations for EPA litigations between 1995 and 2010. Three “Big Green” groups received 41% of this payback: Earthjustice, $4,655,425 (30%); the Sierra Club, $966,687; and the Natural Resources Defense Council, $252,004. Most of this was paid to environmental attorneys in connection to lawsuits filed under the Clean Air Act, followed next by the Clean Water Act.

In addition, the Department of Justice forked over at least $43 million of our money defending EPA in court between 1998 and 2010. This didn’t include money spent by EPA for their legal costs in connection with those rip-offs, since EPA doesn’t keep track of their attorney’s time on a case-by-case basis. ...

This is crony environmentalism involving fraudulent collusion.  Perps on both sides of these transactions should be prosecuted and jailed.

Dennis Prager: "Gratitude is not a distinguishing left-wing trait."

Earls Restaurant decided to drop its Albino Rhino labelled beer in response to a "human rights" complaint from a thin-skinned albino immigrant from Nigeria.  Sadly, according to this report, Earls, rather than fight, caved in with a whimper:


Communications Manager Cate Simpson said it was never their intention to offend anyone, but agreed Earls had come to appreciate people with the rare genetic condition struggle with discrimination.

"We did give thought to the fact we were offending a group of people and to that end we decided to move forward and remove the word albino from our beer branding."

I can understand Earls dropping the label rather than waste time and money fighting this ridiculous nonsense, but did they didn't have to buy into the idiot complainer's bullcrap.

Columbine survivor to Obama: "Whose side are you on?"

Mr. President,
As a student who was shot and wounded during the Columbine massacre, I have a few thoughts on the current gun debate. In regards to your gun control initiatives:
... a universal background check will have many devastating effects. It will arguably have the opposite impact of what you propose.

... The evidence is very clear pertaining to the inadequacies of the assault weapons ban. It had little to no effect when it was in place from 1994 until 2004.
... There are no substantial facts that prove that limited magazines would make any difference at all. ... Why would you prefer criminals to have the ability to out-gun law-abiding citizens? Under this policy, criminals will still have their 30-round magazines, but the average American will not. Whose side are you on?
...

Mr. President, do the right thing, restore freedom, and save lives. Show the American people that you stand with them and not with thugs and criminals.

Martha Hall Findlay's apology for her supposedly "personal" attack on Justin Trudeau during Saturday's Liberal debate has been all over the news.

There was nothing especially wrong with Findlay's challenge to Trudeau. It was weak as "attacks" go but she raised a legitimate issue to someone who has been yapping non-stop about being a saviour of the middle-class (imitating Obama, no doubt).


"... I've been lucky in my life ... and what is important for me is to put everything that I've received, like each of us wants to, in service of my community. And that is what my identity is all about."

More like in service of Justin Trudeau's bank account. Findlay should have also attacked Trudeau on his highly questionable practice of soaking charities and schools $10K - $20K a pop for speaking engagements while on the taxpayers' dime as a sitting MP, often skipping parliament to do so.  Why didn't she?

Findlay's apology was unnecessary, if not cowardly. It makes her look weak - just another Trudeau suck-up - rather than a serious challenger.
Posted by JR at 12:14 PM 8 comments:


... One third of Vancouverites had confidence in Mulcair and four out of 10 trusted Trudeau— making him the poll’s most trusted politician ....

This survey was obviously taken before the revelations that Justin Trudeau has been soaking charities and schools $10K-$20K a pop for speaking engagements while sitting as an MP, skipping parliament to do so.

Collecting speakers' fees while a sitting MP may be within the Ethics Commissioner's rules but most if not all other MP's speak to charities and schools all the time, at no charge, as part of their duty as parliamentarians. If Justin Trudeau's disgraceful practices fall within the ethics rulebook for MP's then that rulebook obviously needs a serious re-write.

Ezra's now had a look at the complete list of Justin Trudeau's speaking engagements and finds he's been skipping parliament to cash in (at between $10K and $20K a pop).

There's something very odious about parliamentarians collecting speaking fees.  Justin Trudeau, in particular, is a wet-behind-the-ears dilettante with nothing useful to offer by way of advice to anyone, not even students.  Why would any serious organization or corporation pay a substantial fee to hear him speak?  What's in it for them?  Access for legislative favors?

This seems to be is a recipe for corruption.  If there aren't rules against it, there ought to be.


... This strikes a lot of people as unethical. And in a moral sense I agree, particularly since Trudeau took most of that money from school boards, library associations, youth groups and charities.

But the golden boy of Canada’s Liberal party has broken no Parliamentary rules. Those who have criticized Trudeau’s actions – including many MPs – need to work to change House of Commons’ regulations ...


Lorne hits on a very important question.  Why the hell are schoolboards and others, who ought to know better, wasting significant cash, especially taxpayers' cash, to hear Justin freaking Trudeau?


... the first question I asked myself when the details of Trudeau’s speaking credits became public on Thursday was: Who would pay to hear him talk in the first place? The man is a vapid tangle of feel-good platitudes about youth, potential, concern, caring and the future. His stump speeches on the leadership campaign trail these last few months have been almost entirely content-free....


There are three problems I have with the ethics of Trudeau’s paid speeches, though.
First, he often missed sitting days and votes in the Commons to be away giving talks, which means he put his own ambition and enrichment ahead of his duty to his constituents.

And, finally, it is far too easy for organizations seeking influence in Ottawa to slip a prominent MP a few thousand for a half hour of pontificating. So the practice should be abolished.

... Mr. Polman is not only a co-chair of Davos, he is incoming chair of the WBCSD [World Business Council on Sustainable Development] and a prominent member of the UN Secretary-General’s High Level Panel on the Post-2015 Development Agenda.

Mr. Polman’s speech ticked all the boxes of what [is] also called “millennium collectivism.” He denigrated business short-sightedness, promoted climate catastrophism and suggested that what was needed was a “new model” of capitalism in which giant corporations would sacrifice shareholders in order to solve global problems.

... The problem of the modern corporation is not that it forces single-minded devotion to the bottom line on its managers, but that it gives them too much leeway to dabble with dangerous fads. Meanwhile, those who spout about a “new model” for capitalism invariably hold an inaccurate and demonic image of the free-market original, which is still the only truly “sustainable” version.

This story puff-piece by Glen McGregor about Justin Trudeau's wealth appeared in most Postmedia News outlets this morning (on the front page of the Ottawa Citizen).  It didn't take Ezra Levant long to debunk it and ask some serious questions:

The motion: 'This House Believes Religion has no place in the 21st Century'

Speaking for the motion:
Andrew Copson, Chief Executive of the British Humanist Association,
Richard Dawkins, evolutionary biologist and militant evangelical atheist, and
Arif Ahmed, Senior Lecturer in the Faculty of Philosophy at the University of Cambridge.

Speaking against:
Rowan Williams, former Archbishop of Canterbury, ,
Tariq Ramadan, Professor of Islamic Studies at the University of Oxford, and
Douglas Murray, Associate Director of the Henry Jackson Society.

Most interesting was Douglas Murray's argument against the motion.  Murray is an atheist who made no bones about his personal opposition to the views of the other two speakers on his own side of the debate, Williams and Ramadan.

The result: Cambridge students voted 324 versus 138 against the motion.

At the National Prayer Breakfast:


and with Sean Hannity afterward:

Ted Nugent to Piers Morgan: "You are so full of crap!!"


... there’s been an ongoing series of rants in my local newspaper ... from global warming activists posing as moralists with holier-than-thou views about how noble their world view is, and how terrible that of others who aren’t jumping on the bandwagon is.

Today ... a letter so ridiculous, so repulsive, so condescending, and at the same time so hilarious, I thought it worth bringing to attention ...


... had been volunteering his time to help Marine Corps veterans suffering from PTSD and mentoring them. Part of this process involved taking these veterans to the range where one of them snapped and killed Chris and his neighbor for reasons that remain unknown at this time.

Here's Kyle in a recent interview:

Still The Last Best Hope: Why the World Needs American Values to Triumph