They claim to be doing it to save the planet but it won't alter the climate an iota.  Their actions only hamper Canadian production and all the benefits that derive from it.  Global oil production won't decrease, it is steadily increasing; Canada's share of that production (which is already small) will just get even smaller and so will our entire economy. In the name of phony global salvation, Canadians are being screwed, by our own know-nothing "leaders" and activists:

The Liberals are baaackk!


The minister in charge of the labour file ... doesn’t have a clue what she’s talking about....


We've seen this anti-oil, anti-western story before under Pierre Trudeau, and it doesn't end well for anyone.  If Quebec Liberals like Justin Trudeau and Denis Coderre block Energy East, not only will it mean economic devastation, but it will be a great cause of national disunity -- possibly even rekindling western separatism.


... Coderre’s stance represents more than a casual alliance between Not in My Backyard, NIMBY, and Not on Planet Earth, NOPE. It represents part of a much larger UN-based Green Agenda to delegitimize national governments from above and below....


More from Ezra on the Liberals' hypocritical war on western oil (and on no one else's):

Muslim pedophilia being imported to the West

... The West is both complicit and complacent in the evolution of a world where Muslim [pedophiles] are left to roam freely, victimizing defenseless children in satisfaction of perverted lustful desires sanctioned by their religion.


Prime Minister Justin Trudeau’s sideswipes at Stephen Harper and Canadian resources at Davos on Wednesday were not merely unworthy, they were dumb. ...


... The last thing they [our resource industry] need is their prime minister making lame puns overseas at their expense, or implying their livelihoods are infra dig. ...


Economist and Post columnist Stephen Gordon, stirred by the prime minister’s words, this week let loose a trio of tweets, with commendable panache, on essentially this very point. With twitterian terseness he texted: “It takes resourcefulness to extract resources”; “Extracting crude from the oil sands requires an insanely elevated level of engineering skills. It’s not like picking $$ from trees”; “Trudeau is buying into the Jed Clampett trope: resource extraction is something any dimwitted yob could do.”

One hopes that those dumb enough to vote for (or, in the media, to boost and cover for) now PM Selfie are suffering heavy duty buyer's remorse.

"The world is laughing at us Justin"

One response: "actually just laughing at Justin.  They have the discretion to know the difference."

Stephen Harper had gravitas and was taken seriously on the world stage.  From PM Selfie we get smug, narcissistic foolishness and he's treated accordingly by serious allies.

Poll - Will Justin be a good PM? 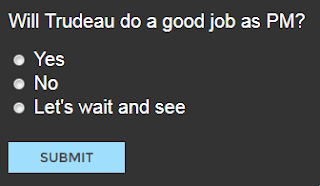 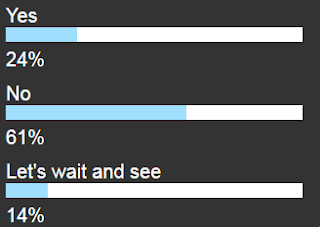 The futility of trying to explain Muslim dangers to liberals

The futility of explaining the dangers of #Islamism to a guilt-ridden, bleeding-heart #Liberal. pic.twitter.com/CkpZKDdgpr Via @dhrxsol1234
— Tarek Fatah (@TarekFatah) January 10, 2016

"Nothing to do with Islam"

As Barack Hussein Obama, the idiot mayor of Philadelphia this week and other useful idiots on the lib/left repeat ad-nauseam whenever terrorists strike, obviously motivated by Islam, that it had "nothing to do with Islam (religion of peace)".

Not that it is needed, but more strong evidence of Islam's culpability came with a recently published study of suicide attacks worldwide in 2015 which documented 452 attacks worldwide of which 450 were committed by Muslims:


... Of course, we cannot avoid mentioning the religious element as the most significant factor that motivates the suicide terrorists throughout the world. Here’s the most dramatic statistic: 450 of 452 suicide terror attacks in 2015 were perpetrated by Muslim extremists. One of the remaining two attacks was carried out by the Kurdish underground. The other was perpetrated by a woman supporter of a leftist group in Turkey.

Note that the Israeli researcher team was very careful about defining what constituted a suicide attack and how attacks were counted, noting, for example, "we consider the terror attack that took place in Paris two months ago as a single attack, even though there were seven suicide terrorists.”

The low moral and intellectual state of the left

Dennis Prager recently wrote a column in the Jewish Journal expressing his concerns:


"... about the Torah and the current unprecedented attempt to blur male-female distinction in biology and society."

It ignited a firestorm of hatemail from the Jewish left.

To which Prager responded "The hate is all in one direction":


... Virtually every one of them is shameful. If you care about the moral nature and intellectual viability of American Jewish life, they are actually frightening.

... I am accused of cruelty, intolerance, bigotry, hate, publicly humiliating someone, ignorance and more.  Yet, there is not a hint of any one of these things in my column.

And, yesterday he followed up with: "The moral and intellectual state of the Jewish left."

... characteristic No. 2: Instead of intellectual discourse, what we have is the dismissal of the decency of the left’s opponents. If you oppose the left, you are rarely debated. Instead you are dismissed as sexist, intolerant, xenophobic, homophobic, transphobic, Islamophobic, racist, bigoted and spewing hatred.

Third, and finally, there is a willingness to make up falsehoods in the service of progressive ideals.


Of course this isn't a problem just with the American Jewish left on the issue of male-female blurring, but with the left throughout the entire West over a wide range of issues.


[We can defend ourselves against Islamists] so long as we exercise our freedom of speech to denounce Islamism and shame those who support it. Which is why Islamists invented the myth of Islamophobia in Western countries to justify their call for a tightening of the noose on this precious freedom. They certainly can’t do it alone, but they have “useful idiots,” ...

One of these useful idiots, Jacques Frémont, president of the Quebec Human Rights Commission (QHRC) and president-elect of the University of Ottawa, is the father of Quebec’s Bill 59, which will give offended individuals the power to have writers they perceive to have criticized Islam censored and punished by onerous fines. This dreadful initiative marks a Canadian watershed in Islamist appeasement, but attention paid to it in English Canada has been shamefully sparse.

Or, as some call him, "PM Useful Idiot" ...  " .... sent a video message to the annual Reviving the Islamic Spirit convention held at the Metro Toronto Convention Centre ... " in which he sucked up to Muslim (voters) declaring:


“As-salamu alaykum, Hello my friends. ... This is ... about celebrating our shared beliefs ...

... As your Prime Minister, I have noted with deep regret a number of highly disturbing acts aimed at Canadian Muslims. ...

... “This is why we are moving quickly to welcome refugees from Syria"

Only a few days earlier an Edmonton Imam, a former Egyptian and Muslim Brotherhood sympathizer, had dedicated a sermon to Trudeau (prophetically?) "likening him to a King who helped Muslims and converted to Islam":


“Justin Trudeau – I call him today the Najashi of the current era. He hosted Muslims, honoured them, visited their mosques, greeted them for their holidays, and removed the suspicion that terrorism is related to Islam, honoured the Muslims, hosted the refugees. [Of course we all know that Islamic terror has nothing to do with Islam]

Earlier this same Imam had preached:


"... O Allah, support all mujahideen in any place around the globe.
O Allah, support any mujaheed (jihadist) who raises the flag of Islam.
The secularism is always in a war against Islam and this conflict between the two still exists.”  [And few are more secular than the ultra-lib/left Justin Trudeau and his Liberals.]