Apparently it's politically incorrect (if not illegal) for anyone but devoted followers to refer to Obama by his middle name.

Henceforth he'll be referred to as Barack (Bleep) Obama.

B. Hussein Obama and his propagandists have been masterful at stimulating great expectations for a positive new era of cooperation between America and rest of the world. For example:

... expectation of "a new multilateralism", based on statements Obama made during his campaign regarding "a new era of global partnership" and of building "bridges of cooperation with the U.N. and other nations."

So how’s that panning out so far? With the ‘buy American’ provisions of the Democrat’s new trillion dollar stimulus bill [passed by the House with zero bipartisan support] it seems Obama’s international honeymoon is rapidly turning sour:

... The EU trade commissioner vowed to fight back after the bill passed in the House of Representatives late on Wednesday included a ban on most purchases of foreign steel and iron used in infrastructure projects.

... The inclusion of protectionist measures has quickly raised hackles in Europe.

Obama capitalized on the intense international unpopularity of the shooting war in Iraq. Does the Obama brain trust somehow think a trade war will help win friends?

Damian Brooks' latest report from the wilds of Afghanistan. Fine reporting and photos.
Posted by JR at 11:45 AM No comments:

Time magazine published this video featuring photos of President George W. Bush during his two terms. It's a very nice tribute, marred only by the loopy comments of one of the photographers who says he was "shocked" by the "cult of personality building up around George W. Bush" following 9/11. Good grief! One wonders what he thinks of the mania surrounding B. Hussein Obama. Sorry, lost my head. No doubt he thinks it's completely rational.

In a Vancouver Province article about a gathering of over 300 Vancouver Obamanuts on inauguration day, Ethan Baron wrote:

I haven't seen a group of people wearing their fervour so completely, and so uniformly, since a guy I used to work with brought me to visit his weird sex cult in California.

Judging from the rest of the piece it seems Baron meant that as a compliment. The comments are worth a read, too.

Inauguration gets churlish critique from media

According to a noted commentator:

"Here's a small sampling of the churlishness in just The New York Times:

-- There is something to be said for some showiness in an inauguration. But one felt discomfited all the same.

-- This is an inauguration, not a coronation.

-- Is there a parallel between Mrs. Obama's jewel-toned outfit and somebody else's glass slippers? Why limousines and not shank's mare?

It is still unclear whether we are supposed to shout "Whoopee!" or Shame!" about the new elegance the Obamas are bringing to Washington.

Read the whole thing (Jan 21st) where we also learn:

Obama was also not as fulsome in his praise of his predecessor as Reagan was. To appreciate how remarkable this is, recall that Reagan's predecessor was Jimmy Carter.

... But I gather that if Obama had uttered anything more than the briefest allusion to Bush, that would have provoked yet more booing from the Hope-and-Change crowd, which moments earlier had showered Bush with boos when he walked onto the stage. That must be the new tone we've been hearing so much about.

Blogger Damian Brooks of "The Torch" is with the troops in Afghanistan. His first couple of reports are here and here.

The Hitch has no regrets that Bush was president

His column may not be the most glowing tribute to George W. Bush but Christopher Hitchens makes some good points.

First and foremost Bush prevented Al Gore and John Kerry from being president. But even had the Democrats prevailed Hitchens wonders how they would have responded to situations in which they so rabidly denounced Bush’s policies:

"... The Effective Death Penalty and Anti-Terrorism Act [was] rushed through both Houses by Bill Clinton after the relative pin prick of the Oklahoma City bombing ... Given that precedent and multiplying it for the sake of proportion, I think we can be pretty sure that wiretapping and water-boarding would have become household words, perhaps even more quickly than they did, and that we might even have heard a few more liberal defenses of the practice.

"... I don't know if Gore-Lieberman would have thought of using Guantanamo Bay, but that, of course, raises the interesting question—now to be faced by a new administration—of where exactly you do keep such actually or potentially dangerous customers, especially since you are not supposed to "rendition" them. There would have been a nasty prison somewhere or a lot of prisoners un-taken on the battlefield, you can depend on that.

"... We might have avoided the Iraq war, even though both Bill Clinton and Al Gore had repeatedly and publicly said that another and conclusive round with Saddam Hussein was... unavoidably in our future. ... I think it's a certainty that historians will not conclude that the removal of Saddam Hussein was something that the international community ought to have postponed any further. (Indeed, if there is a disgrace, it is that previous administrations left the responsibility undischarged.)"

Since Bush pretty much dedicated his presidency to the security of the nation after 9/11 he’s been a success.

Read the whole thing here at Slate.
Posted by JR at 5:46 PM No comments: 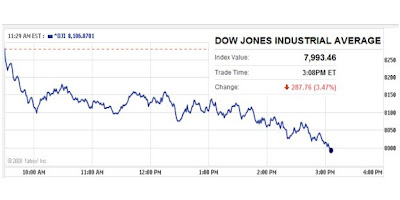 Leading up to his presidential inauguration today Obamamaniacs round the world have been going into giddy, delusional swoons over B. Hussein Obama. Though lately we’ve also been hearing that expectations have become impossibly high. I wonder why:

Loopy, megalomaniacal nonsense that only the lib/left could take seriously.
Posted by JR at 12:02 AM No comments:

This should be interesting.

A columnist in my local rag regularly (and annoyingly) derides "whitebread" Victorians for their supposed lack of diversity. So thanks to George Jonas for his column today on the subject:

... Diversity tolerated is mature; diversity cultivated is juvenile. In the long run, societies either integrate or disintegrate. The melting pot may be inelegant but it's functional; the cultural mosaic is elegant but it's risky and multiculturalism spells, "Hi, folks, welcome to Lebanon."