David Frum spends a lot of time dissing American conservatives.  At every opportunity he snottily derides, insults and dismisses Fox News, Rush Limbaugh, Mark Levin, Glenn Beck, Sarah Palin, the Tea Party and its boosters. At the same time, he's silent about the rabid idiocies of the lib/left.  Liberal media outlets like CNN love to consult him because he can be depended on to slam conservatives.  Then Frum wonders, and so does Barbara Kay, why they treat him like the plague.

Barbara closes with: "David, they don’t deserve you down there. Come on home where you’re understood, appreciated and respected. And where you can be a conservative and also a mensch.

Speak for yourself, Barbara.  We don't need any more Joe Clark conservatives here. They're toxic.
Posted by JR at 6:41 PM 3 comments: 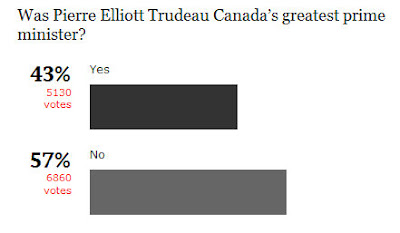 Nope. Trudeau was a dilettante and is vastly overrated. Though his poll numbers seem to be dropping nicely.
Posted by JR at 1:32 PM 7 comments:

If this doesn't get him fired, what will?

High level NASA bureaucrat and radical political activist, Dr. James Hansen, has been arrested for his participation in an anti-coal mining protest.
Posted by JR at 1:10 PM 2 comments:

Labels: global warming, James Hansen, Watts Up With That

It's official - the U.S. Congress is a joke

What could go wrong?

In the Globe the headline is:

and SDA fixes it for them:

We have a gun registry.
Your father still shot himself.

Scott Simms is shameless manipulator. Using his father's tragic suicide, which he admits had NOTHING to do with the gun registry, to excuse his flip-flop and whip up emotion ahead of the vote is beyond the pale. He should apologize to his family and to Parliament for his crass behaviour. Also, his Liberal colleagues should be ashamed for pumping-up Simms' bogus appeal to bleeding hearts.

As for the Globe and the likes of Jane Taber, we expect them to get sucked into this kind of emotional BS and illogic.
Posted by JR at 4:40 PM 2 comments:

Last week the CBC’s Jian Ghomeshi held a “debate” between Mr. Levant and Mr. Nikiforuk [see 'Q' past episodes, Sep 15]. Mr. Levant steamrollered both of them (it inevitably turned out to be two against one). I could almost have felt sorry for Mr. Nikiforuk if he hadn’t started out by suggesting that oil was either “The Devil’s tears” or “The Devil’s Excrement.” With imagery like that, you know that objectivity has already gone out the window. Ethical Oil provides some desperately needed perspective.

I like the CBC debating rules - the lefty host/moderator joins in to gang up on 'the enemy'. Very classy, Ghomeshi!
Posted by JR at 2:33 PM 6 comments:

A comment at WUWT points to an interesting article:


... If you're one of those people appalled by the politicization of science by celebrities, congressmen, and the Nobel Committee, I highly recommend you take a look at the work of Professors Kerry Emanuel and Daniel Rothman at the Department of Earth, Atmospheric, and Planetary Sciences at MIT.

Kerry and Dan are neither climate change zealots nor global warming deniers. In fact, they are not even in the business of making climate predictions. In their view the wildly varying climate forecasts spit out by hugely complex black-box computer models have not only become disconnected from sound science but have drawn all the money and talent away from the critical challenge of trying to understand how basic climate mechanisms work. ...

Exactly the motivatations behind Michael Crichton's skepticism.
Posted by JR at 12:28 PM No comments:

Labels: global warming, Michael Crichton, Watts Up With That


Physicist Dr. Denis Rancourt, a former professor and environmental science researcher at the University of Ottawa, has officially bailed out of the man-made global warming movement, calling it a ‘corrupt social phenomenon’.

And so how did his former friends and colleagues react?

Rancourt's dissent on man-made climate fears has not set well with many of his fellow green friends. “When I tell environmental activists that global warming is not something to be concerned about, they attack me -- they shun me, they do not allow me to have my materials published in their magazines,”...

And in a related link:

Update: A commenter at WUWT notes:

Denis Rancourt’s first and most comprehensive essay on Global Warming came out in 2007, shocking many leftists. ... Full article is here ...

Greenpeace, a slippery pack of cowards


... Greenpeace is good at bashing oil — but only in very safe countries. They’ve never had a protest, or even a press conference, in Riyadh or Tehran.

The idea of Greenpeace activists breaking into a Saudi or Iranian refinery and shutting it down, like they regularly do in Canada, is unthinkable — they’d be shot dead by those bully regimes....

That's one theory. Another is that the Saudis and Iranians are bankrolling Greenpeace's oilsands bashing.
Posted by JR at 5:15 PM No comments:

Jimmy Carter in an interview with NBC's Brian Williams:


“I feel that my role as a former president is probably superior to that of other presidents, primarily because of the activism… .”

When your Premier gets caught driving dead drunk and survives the political fall-out ...

the safety zealots push for and get ridiculously harsh laws.

No one condones drunk driving because it's drunks who do the damage. And those same drunks are going to ignore the new laws the way they ignored the old ones. But someone with a blood alcohol level of .08 is not "drunk". In fact up until today it was considered safe to drive at that level. The people that will be unjustly punished are those caught with blood alcohol between .05 and .08. Oh, and don't forget the damage to businesses that rely on selling a glass of beer or wine with dinner.


"... just imagine the uproar if Maher said Obama’s problem is that he was half white and that “there’s a [black] man in him holding him back because everything is half-assed.”

Obama denies being a socialist, yet he keeps appointing socialist radicals.  Commie, Van Jones as "Green Jobs" Czar (since fired); now we find that his science Nimrod, John Holdren, advocates the "de-development of the U.S." and the "re-distribution of its wealth" as the only way to provide a decent life for everyone.  The idiots just won't give up their non-sensical zero-sum economic theory.  The twist this time is that they'll use the "free markets" to do it.  Wonder how that works?


Canadian author Margaret Atwood is a free-speech activist. She is the vice-president of International PEN, the advocacy group for imprisoned writers.

As a civil libertarian, Atwood defends freedom, even for odious people. Like Al Jazeera, the satellite network owned by an Arab sheik. Al Jazeera helps publicize terrorists like al-Qaida, who send snuff videos to the channel, knowing they will be obediently aired as propaganda.

... So imagine how bad the Sun must be — I’m talking about this newspaper, dear reader! — for Atwood to sign a petition demanding that a TV news channel proposed by Sun Media be stopped by the Canadian government.

... Peg Atwood violated everything she stands for, by asking the government to censor it.

From commenter "batb" on Ezra's blog:


There's no longer any doubt: Peggy Atwood is a CanLit whore, living high off the hog of ... cultural welfare. Without all the government largess, Peggy-I-can't-be-bothered-to-open-my-mouth-when-I-talk Atwood couldn't possibly be a millionaire socialist ...

A guest post at WUWT on glaciers elicited some (im)pertinent comments. Eg:

How glaciers have responded to the warming of the past 13,000 years is a complicated story, …

… would have been a less biased starting point, since the glaciers have been retreating since at least that far back. If they hadn’t, it would be rather difficult to drop the ball in Time Square on New Year’s Eve.

Would we really want to live in a period of time where glaciers were growing?

Poll - Do you support the long gun registry?

Mark Gillar and Brian Sussman on blogtalkradio discuss Brian's recent book "Climategate: A Veteran Meteorologist Exposes the Global Warming Scam".  There's lot's of discussion of Al Gore, his monumnetal hypocrisy and the monumental pile of bullcrap that he's spewed.
Posted by JR at 12:19 PM No comments:

Rex Murphy delivers some of his trademark common sense on the Florida Pastor's project to light a stack of Korans on fire:

... one cunning or dim-witted, rabid or naive, publicity genius or blundering innocent, self-proclaimed Christian pastor, Terry Jones, declared [what] he was going to do with some 200 copies of the Koran today...

... Why is anyone paying attention to this guy?... He's a non-entity of a splinter church with a piddling 30 or 50 followers. What he does or intended to do is of no social, symbolic or geopolitical consequence whatsoever.

... But what was really odd was how the great and powerful of the world reacted. All week, he was being beseeched by the mighty of the Earth to stop what he and his little band of true believers were proposing to do. There was the Vatican, there was Tony Blair. In Canada, Stephen Harper, Peter MacKay and Michael Ignatieff weighed in. And General David Petraeus, the overlord of the wars in Iraq and Afghanistan, astonishingly proclaimed that Terry Jones' stunt would undermine the "total effort" of the war in Afghanistan.

... In fact, Barack Obama himself has been publicly pleading with Jones to put off the event. And most tellingly, Obama's Secretary of Defense, Robert Gates, undoubtedly under orders from the White House, went into direct personal discussion and negotiation with the Florida-based pastor to get him to change his plans.

... There is something profoundly unserious here, undignified and immensely off base. The first General of the United States, and the Secretary of Defense of the greatest war machine in the history of the world are both deferring to some fringe evangelist for fear that he might ... what? Might lose the war for them? If this is the splinter the war on terror is hanging on to then it is, I fear, a house of cards in both theatres.

On the bright side, though it may be rude (free expression often is) what the Pastor's little escapade shows, once again, is how easily provoked and violent are Muslims.  But we see little condemnation of that element from our political and media elites - instead they just appear to be intimidated by Islamists.
Posted by JR at 12:48 PM 4 comments:

Doctors converge in BC

That would be American doctors converging in BC.  The usual way to get help from the US medical system is to travel south.  But this time a motorcycle accident in BC had the injured rider tended to on the scene by two doctors on vacation, both from Seattle.  Coincidentally, they knew each other and one was a former Canadian who was:


... originally from Vancouver, earned his medical degree from the University of B.C., and went to the U.S. in the 1980s when he couldn't get a billing number from the provincial government, which had then put a freeze on hiring more doctors. Our loss was the U.S.'s gain. Parker is now vice-president of U.S. Health-Works, a network of more than 140 medical clinics across the country.

Now in BC there is still a huge shortage of doctors. Here in Surrey there are 10 taking new patients.  Only two are Canadian trained. None are US trained (naturally).  The other eight are from South Africa (2), the UK(2), India(2) and Pakistan(2).