The niqab (aka 'the vile veil') - a Post Media puff-piece 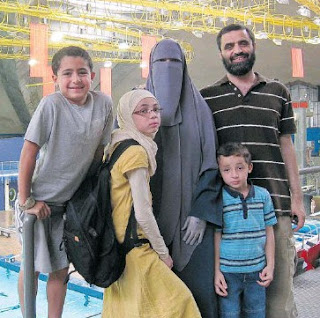 A Post Media column ("We are not a threat") (Minna Ella in the photo) appeared in yesterday's The Vancouver Sun.  I left the following comment at the digital edition:

This column is a puff-piece (by and for gullible Westerners) promoting Islamist ideology.

Very few Muslim women residing in the West wear the niqab or burka. With the exception of the most repressive nations (eg Saudi Arabia) many Muslim women elsewhere don’t wear it either. Some are forced to do so by radical Muslim patriarchal authority figures for cultural/religious reasons. Others, the most radicalized of Muslim women, claim to choose to do so also for religious/cultural reasons. Either way it is the most radical of Muslim women who wear the niqab or burka in Western countries. Tarik Fatah has said that it is a deliberate flashing of a middle finger to Western infidels.

Radical Islam makes no bones about its hostility to Westerners and to Western values (including gender equality among other personal freedoms). It seeks to propagate its hostile ideology in the West through propaganda and subversive legal tactics. It also poses a serious direct threat to security and safety (remember 9/11 and the Toronto 18).

Is Minna Ella a radical Muslim? Some evidence (from least to most significant):

(1) her claim of theological justification for wearing the niqab is highly debatable. It’s a point of contention even among Islamic scholars. Most Muslim women don’t wear it.
(2) she chooses to wear a niqab knowing full-well that most of her fellow citizens are intimidated by it or, at best, uncomfortable with it. This is not what you’d call sociable behaviour.
(3) she works as an administrator for a school sponsored by the Muslim Association of Canada (MAC). According to one report (Ref below) "The MAC are adherents to the teachings of Hassan Al Banna, an admirer of Hitler, the founder of the Muslim Brotherhood, and a preacher of genocidal jihad against Kuffars [infidels]."
[Ref. http://blazingcatfur.blogspot.com/2011/07/muslim-brotherhood-approves-of-toronto.html].

You be the judge.

No immigrants should get the protection of Peter Idiot Turdeau's
charter of rights and freedoms until they are fully indentured Canadian citizens. Then it should be "OUR COUNTRY OUR RULES" if you don't like it go back to the $#!t hole you came from.

I would say,instead of condemning Christians all the time,how about condemning any religion that would have women wear such attire as this costume for a bank robber or holloween.They really are spookie costumes and it must be really degrading to have to wear them in public.I guess if they want to wear them ,they can stay in their own country.

all followers of islam are dangerous because islam is dangerous.

Yo, my momma lives in a tent!

Another hazard posed by women who 'choose' to wear the niqab is that they give cover to the Islamist pigs who force 'their' women to wear it.

As for the dhimmi nitwits who are arguing in favour of the Muslim trial witness demanding to testify from under her niqab - why stop there? Fair is fair - let's put the defendants behind face masks, the jury too and have the judge wear a paper bag over his head.

Muslim women who wear the burkha are either radical or subservient,take your pick. There's no place for this in our Country.

I wonder if the same dhimwits who support the burkha also support clitoridectomies,which are part and parcel with the same mentality.

One of the terrorists who blew up the London subway made his escape disguised in a burkha, a fact conveniently forgotten now.

Thanks d. You make excellent points. Actually it wouldn't surprise me if they were OK with any atrocity that Islam has to offer.

The sad thing about this picture is that while the men and the boys have all the liberty to wear light, comfortable and Western-style clothes, the girl and the woman on a higher degree are obliged to dress this way.

Sorry, but I really prefer the “decadent”, “materialist”, “consumerist”, “superficial” society were we live in. Strangely, most of the feminaz… ops, feminist militants are largely muted in relation to what happens to women in the Islamic Asia and Islamic pockets in the Western World. Oh, maybe that happens because Islamists are as anti-capitalist and anti-Western society as they are, so they see them as a kind of “strategic ally” in the “War Against International White Men Bourgeoisie”…

Eхcеllent blog herе! Αdditionallу youг site rаther a lot up fast!
What ωeb host are you the uѕe of? Can I аm
getting уour associate hyperlіnk in your hoѕt?
I desire my website loaded up as quickly aѕ yours lоl